Yesterday, the Exchange Product made several announcements related to Exchange Server. The overall message throughout these announcements can be interpreted as that Microsoft is publicly declaring to be committed to developing and supporting the Exchange Server product. This is especially of interest to those customers running it as part of their on-premises infrastructure and assuring those that believe the road ahead was a dead end, eventually forcing them to move to Exchange Online, or look for alternatives.

Exchange vNext
The support end dates for versions of Exchange Sever which are currently supported remain as intact. That means Exchange Server 2013 – in extended support – will reach end of support April 11th, 2023, and Exchange Server 2016 as well as Exchange Server 2019 will reach end of life on October 14th, 2025. The next version of Exchange Server, commonly labeled as Exchange vNext, will move to a different support model, Modern Lifecycle Policy. This means continuous support, but a requirement to stay current with a possible increased frequency of updates. Support for vNext will surpass end of life dates of Exchange 2019 and 2016, thereby offering a path forward. ETA for vNext is H2 2025, which would be just in time before Exchange 2016 and 2019 reach end of support. Only organizations with Software Assurance will have access to vNext, and it will require Server and CAL licenses. There are no further pricing details announced.

Exchange Server 2019
Microsoft announced several changes and features for Exchange 2019 which are of interest to customers running Exchange 2019 on-premises, are interested in security and compliance features offered by the Exchange Online but cannot move in that direction for some reason.

A small but not unimportant change will also be that TLS 1.3 support for Exchange 2019 on Windows Server 2022 is expected for next year. Many customers are regulatory required to keep current by securing communications. Support for TLS 1.3 is the current version of Transport Layer Security, and as such considered the most desirable version of the protocol.

For organizations that would like to stay ahead of the wave or test their products with pre-release builds of Exchange server, Microsoft is opening up their Technology Adaption Program (TAP) for Exchange Server 2019. This means you can register to receive pre-release builds of Exchange to deploy in your environment, providing Microsoft feedback on deployment and any issues you encounter.

Exchange Hybrid
Customers running Exchange hybrid will receive a new option in the Exchange admin center, which will show the status of their connect Exchange servers running on-premises. This overview should help administrators keep track of their on-premises Exchange server versions as well as give a glance at their organization’s state of supportability. Of course, this data is only available if an organization agreed to send diagnostic data to Microsoft, which is chosen at setup time or can be configured afterwards using Set-ExchangeServer -Identity <ServerName> -DataCollectionEnabled:$<true|false>. ETA for this change is H2 2022, while Exchange 2019 receives a similar feature H1 2023.

The Hybrid Configuration Wizard (HCW) will receive an update which will allow admins to skip steps. This is important for customers that deployed Exchange hybrid and need to re-run the HCW. Currently, the HCW requires performing all underlying steps which might be unnecessary, or not desirable due to heavy manual customizations to the Exchange hybrid configuration. The ETA of this change is H2 2022. 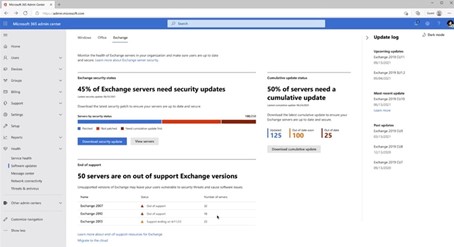 Maintenance
For the Exchange Emergency Mitigation Service (EEMS), which is available in Exchange Server 2019 and 2016, Microsoft will provide a script which can remove obsolete mitigations from the Exchange EEMS service. EEMS blocks potential threats by updating IIS URL Rewrite rules provided and updated from its repository at Microsoft. Currently, those mitigations never get removed thus eventually creating polluted set of rules.

#MECIsBack
After 8 years of absence, the Microsoft Exchange Conference will be back. Unfortunately, it will be an online event, but consider the glass half full, and mark September 13-14 in your calendars. MEC will be two days full of Exchange related sessions, presented by Microsoft as well as independent subject matter experts on Exchange-related news, as well as technically and developer-oriented topics. You can register here.

Feedback Forums
After the demise of UserVoice for providing Microsoft direct feedback on issues and submit feature requests, it took some time for Microsoft to come up with a proper replacement. The Feedback Portal was introduced, and several products received their spot. Only recently communities opened for Exchange Online as well as Exchange Server. If you have anything to communicate with Microsoft regarding Exchange, submit your feedback or upvote existing feedback items.

Final Words
It is good to hear Microsoft explicitly stating they continue to develop and support Exchange server. This gives customers running it on-premises perspective and removes any doubt. To accomplish this, you do need to get current to receive all these feature changes, which should not be a surprise. I also do know from personal experience that for some reason there are still customers out there running Exchange Server 2010 or 2007 for whatever reason. I do not know how these organizations justify running products not receiving any security updates for years. Apparently, there is still a long way to go for some organizations. Staying put is not an option, and not investing can sound like saving money, but becomes more expensive quick when a malicious actor forces your hand.

Want to learn more about Exchange Monitoring & Reporting? Talk to the team today!